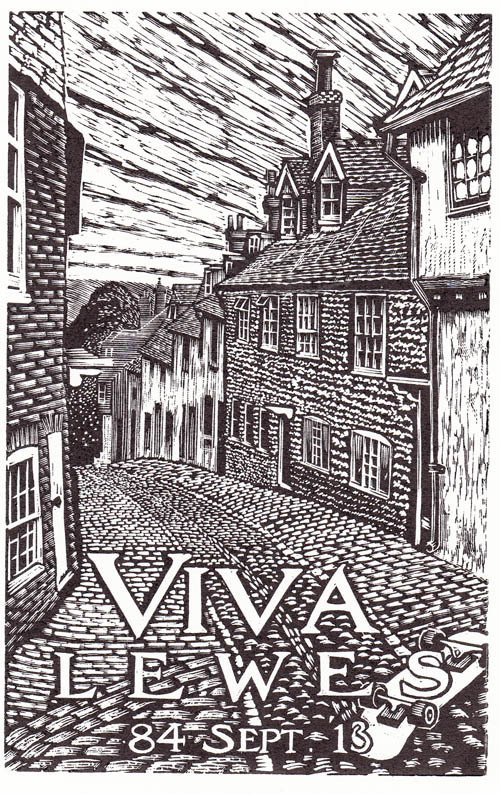 This engraving was origianally a commission for the amazing magazine- Viva Lewes in September 2013- the edition looked at the towns buildings- hence we looked at the wonderful Keere Street. Here's what they said about the engraving at the time:

This month’s cover is a life-sized wood engraving by the excellent Keith Pettit, a long-time Viva collaborator. When pressed, Keith reveals this is the biggest and most time-consuming engraving he’s yet done: it took him 21 hours in total (he counted). The process is multifold. First he made a detailed watercolour-and-pencil sketch of Keere Street, then he drew a grid on top of it. On his hardwood block he drew a smaller to-scale grid, and proceeded to translate the sketch, in reverse, onto the block, again using ink, pencil and gouache. Next the most laborious bit:generally working frm dark to light tones. “I used every one of my nine tools,” he says. “This lends the image the depth it needs to work on this scale.” Keith chose Keere Street in keeping with our theme of ‘buildings’: “I love the view down the hill, and the fact you can see the Downs in the distance,” he says. He included the upside-down skateboard to bring the image into the twenty-first century, and also ‘to tip a wink to the story that the Prince Regent rode down the hill in a coach and four’. The lettering he’s used, however, goes back to the turn of the twentieth century: it’s an American art nouveau sign-painter’s font.

The engraving is printed on hand made Zerkell paper in an edition of 100 and the original lemonwood block measures 150mm x 105mm. As with all my prints I send through the post- it comes mounted only. Each print forom the edition is individually hand printed by hand signed and numbered.

Save this product for later
Display prices in: GBP
bottom of page